Earlier this year Duchess Catherine announced a very exciting garden project she was working on for the annual Chelsea Flower Show coined 'Back To Nature', and this weekend she gave her family a sneak peek before its public reveal!
In a series of adorable posts on the Kensington Royal Instagram page, the Duke and Duchess of Cambridge have shared six photos of their family playing in the woodland wilderness garden.
Images include Prince George, 5, and Princess Charlotte, 4, dangling their barefeet into the stream, the family building a campfire outside a den and the very first photos of Prince Louis, 1, walking.
The garden has been a project Duchess Kate has worked on for the past few months in collaboration with the Royal Horticultural Society (RHS) and landscape architects Andrée Davies and Adam White, and it was revealed in the Instagram posts the all three of her children also lent a helping hand to "gather moss, leaves and twigs to help decorate the @The_RHS Back to Nature Garden.
"Hazel sticks collected by the family were also used to make the garden's den," the caption explains.
And, in an incredibly touching tribute, it was revealed that Kate chose forget-me-not flowers for the woodland floor, which is known to be her late mother-in-law, Princess Diana's, favourite flower.
Kate was embracing summer in a gorgeous floral printed dress by & Other Stories paired with Castaner espadrille wedges, according to a royal fashion finder on Twitter, with Princess Charlotte opting for floral print too in an adorable dress with ruffled cap sleeves.
Prince William wore a blue shirt paired with brown trousers and matching shoes, while Prince George rocked his signature shorts with a light blue polo and little Louis looked adorable in red and white stripped shorts and a navy blue sweater.
Other images shared include the children playing on a swing set which hangs just below the centrepiece of the garden – a high platform treehouse which aims to encourage creative play.
In one image of Princess Charlotte having a play on the swing, she looks like an adorable mini version of Kate, emulating her mother, who last week also shared a photo of her testing the swing out too.
See the resemblance below! 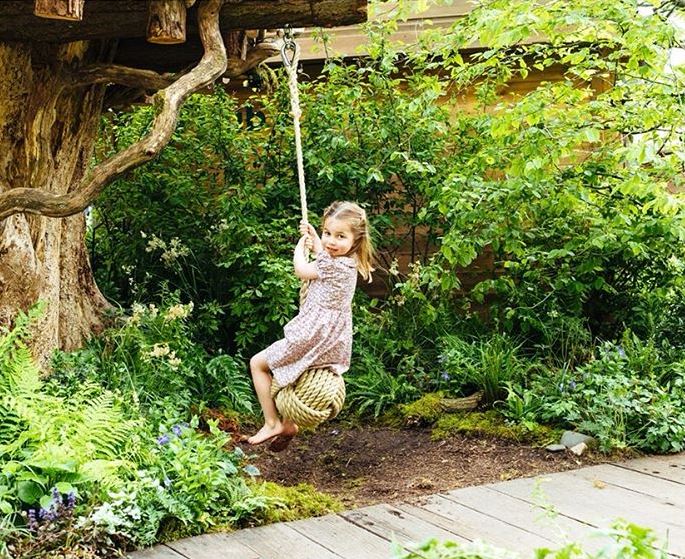 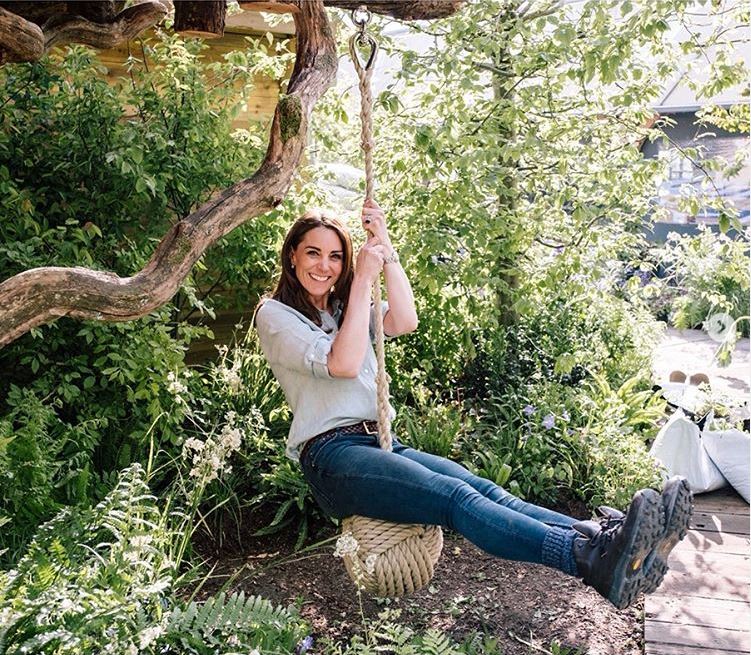 ← Slide →
The Back To Nature garden includes a swing set, treehouse, stream and waterfall, a rustic den and campfire and stepping stones and co-designer Adam White said the Duchess had been incredibly hands-on throughout the garden's creation.
"The duchess joined us as it all started coming together," he told People.
"It's addictive and once you've got the bug you can't stay away."
Andree Smith adds, "Hopefully when people visit they will find their inner child."
Duchess Catherine has always been incredibly passionate about mental health and childhood development and her woodland wilderness garden reflects her strong advocacy for the proven benefits the outdoors has on physical and mental health, and the positive impact that nature and the environment can have on childhood development in particular.
Speaking to Monty Don from the BBC, Kate said: "I really feel that nature and being interactive outdoors has huge benefits on our physical and mental wellbeing, particularly for young children.
"I really hope that this woodland that we have created really inspires families, kids and communities to get outside, enjoy nature and the outdoors, and spend quality time together."
Kate's involvement was first announced in January with the RHS saying they were "thrilled" at the prospect of having Kate on board.
The Chelsea Flower Show runs from May 21th to May 25th at Royal Hospital Chelsea in London.