On Saturday the 9th of June, the royal family celebrated Queen Elizabeth's birthday at the annual Trooping The Colour event.
The annual event sees the entire family gather and culminate on the palace balcony - much to the delight of royal enthusiasts and fans.
We've compiled our favourite moments from this year's Trooping The Colour. 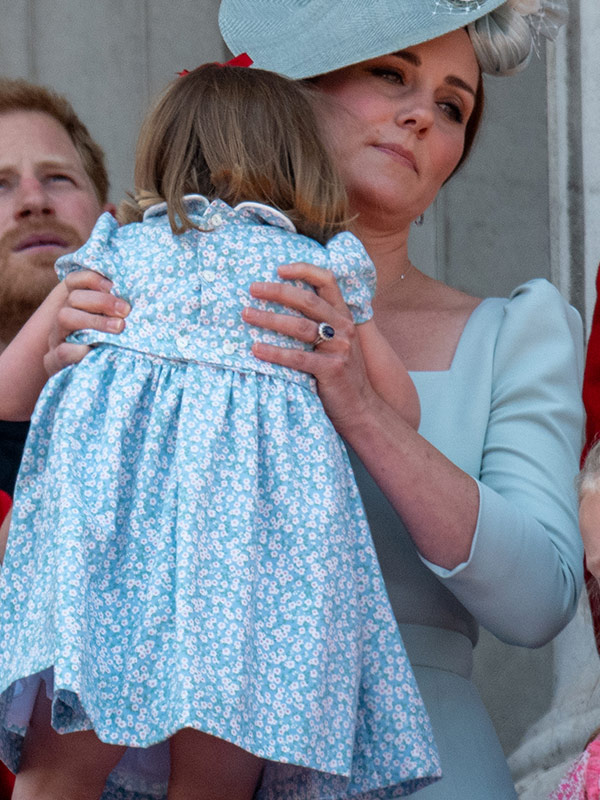 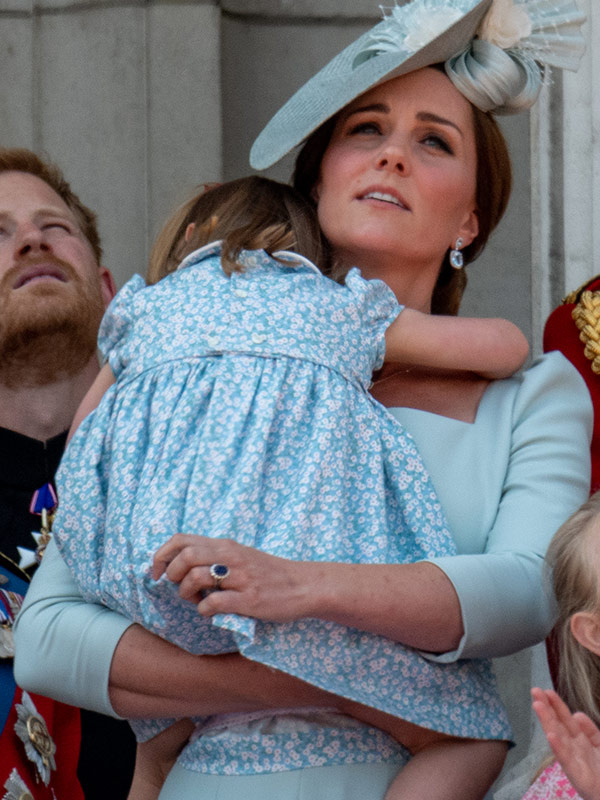 Prince George was teased by his cousin Savannah Phillips

It's official: The Queen's great-grandchildren just stole the show!
Princess Charlotte looking away as her cousin Savannah Phillips teases Prince George actually has us laughing.
It looks like she's trying to stop George from belting out some very cute vocals.
Watch: See that moment in the video player underneath!

Charlotte matched with her mummy, also wearing baby blue.
It hasn't been confirmed but the print does look like something that could have been designed by an old school friend of Catherine's, Alice Avenel.
Her pal from Marlborough college created Charlotte's Periwinkle dress under her brand Little Alice London, which she wore when she met Prince Louis. 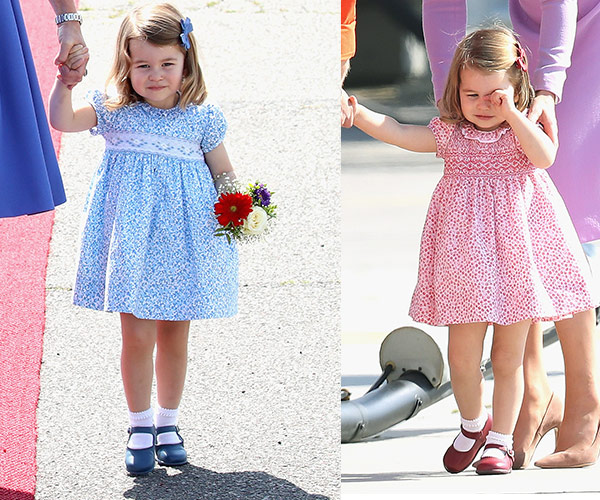 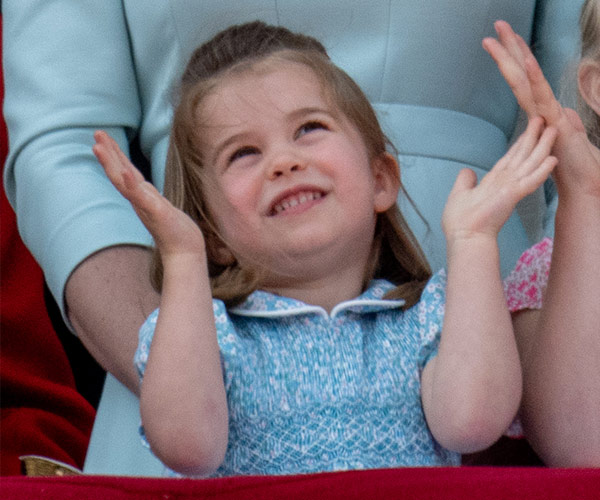 ← Slide →
Prince George was darling in his white shirt by British childrenswear brand Amaia with navy blue piping.
We saw him in the shirt back in 2016 for Trooping The Colour. 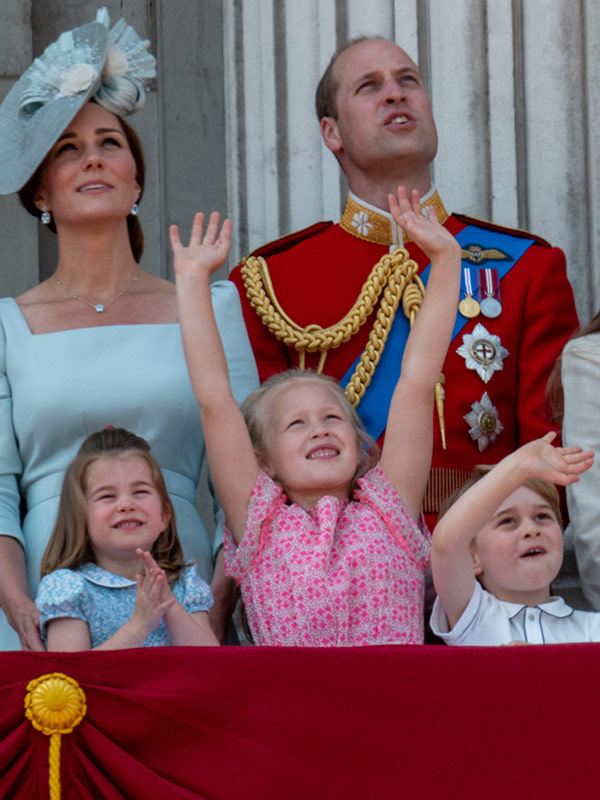 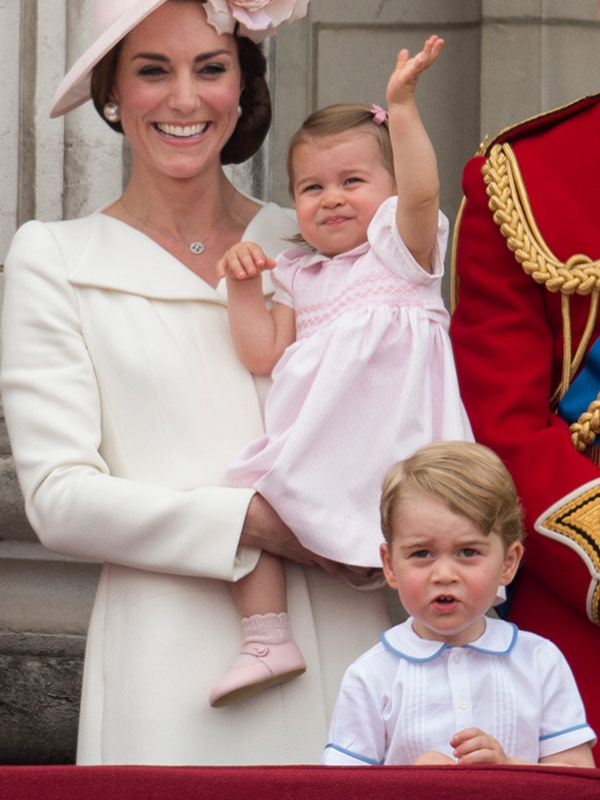 Princess Charlotte and Meghan Markle's reaction to the planes 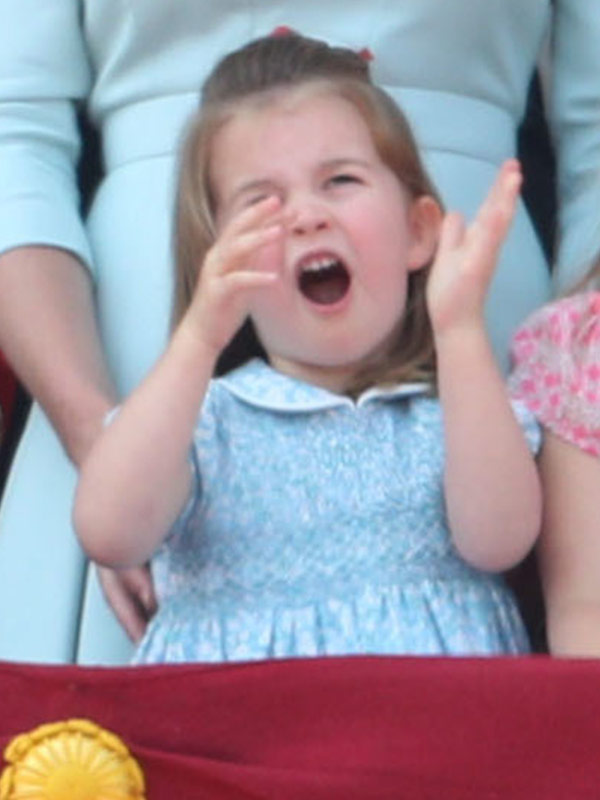 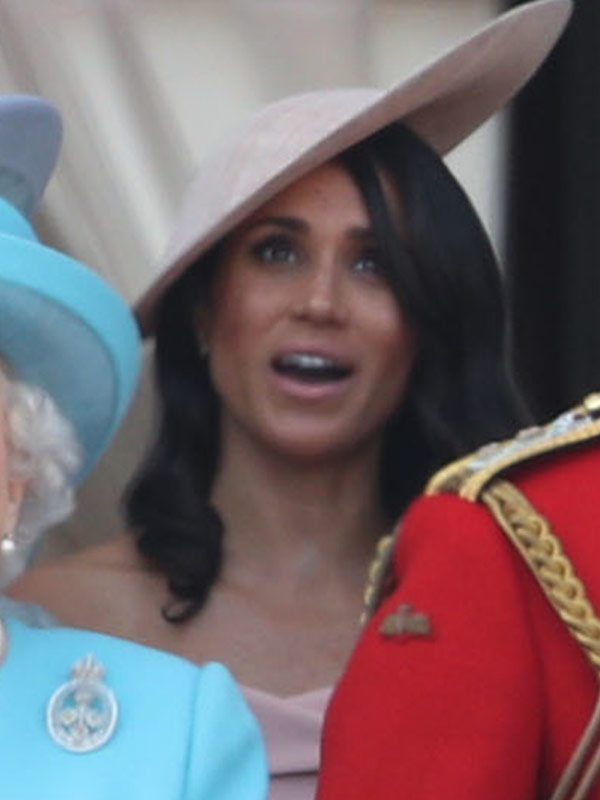 While we loved seeing the entire royal family on the balcony of Buckingham Palace, it was their impressive entrances that really stole the show.
Looking beautiful in pale pastels, Duchess Catherine and Duchess Camilla were the first of the royals to make their way to the Palace.
Both women opted to wear pale blue hues, which complimented the birthday girl's pretty bright blue outfit.
Catherine, who welcomed Prince Louis just two months ago, went with one of her favourite designers - a pastel blue dress created by Alexander McQueen, teamed with a matching hat by Juliette Botterill.
Camilla opted for a blue Bruce Oldfield coat and dress.
And right behind them were newlyweds the Duke and Duchess of Sussex!
Unsurprisingly Meghan, who is often compared to her sister-in-law, went for a completely different look.
Prince Harry and Meghan Markle looked very in love as they rode in.
The newly minted royal, Meghan, decided to also stick to the pastel theme, donning for pink hues - her choice for her very first royal appearance after she married Harry.
The Duchess wore a pale pink off-the-shoulder dress by Carolina Herrera with a matching hat by Philip Treacy.
Harry wore his ceremony uniform of the Blues and Royals.
Fans were ecstatic to see the couple - screaming with joy as they got a glimpse of the pair.
Meanwhile, Her Majesty looked resplendent in a bright sky blue outfit designed by Stuart Parvin.
The birthday girl, who was actually born on April 21 but marks her milestone officially in June, teamed her outfit with the prettiest matching blue hat that featured a floral arrangement.
The accessory was created by Her Masjesty's go-to millinery creator Angela Kelly.
Riding alone seemed to be no problem for the Queen, with her husband Prince Philip deciding to skip the event now that he's retired.
Prince Philip may have opted to skip the event for his third time, but the Queen wasn't short of loved ones.
Taking charge, we saw Princess Anne and Prince Andrew ride on horse-back.
While the Duke of York's daughter Beatrice and Eugenie were in a carriage with Sophie of Wessex and her daughter Lady Louise.